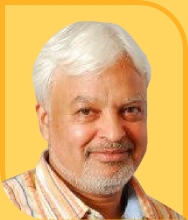 Prof HS Jamadagni was the ex-chairman of the Department of Electronic Systems Engineering (DESE), Indian Institute of Science (IISc), Bangalore.

He popularized the Microprocessor in India by offering hands-on courses throughout the country.

He was the chairman of DESE during 1996 – 2009. During these years, he established very effective relationship and collaboration with leading industries, bringing many challenging projects to the Centre. This has also resulted in the creation of excellent facilities for research, development as well as teaching.
His professional areas of interests, among others, are Wireless Sensor networks, embedded systems, Internet of Things, and social networks. His current research work is in IOT and its applications, as well as computing architectures for high-speed wireless networks. He has conducted a large number of hands-on workshops on IOT and data analytics throughout the county with support from Intel during the last two years.

He was deeply involved in its design, inception, and implementation of the World Bank project IMPACT. He has active collaboration with several Industries including Intel, TI, Boeing, and educational institutions such as EPFL, Switzerland and TU Delft.

He served as Member in Telecom Regulatory Authority of India (TRAI) during 2010 – 13. He is currently driving the “Centre of Excellence” for supporting Micro, Small and Medium Enterprises (MSME) supported by the ministry of MSME, GOI.